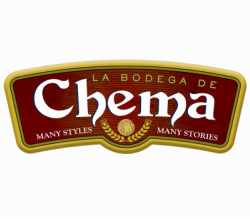 La Bodega de Chema is formed from the need to have a place for the education and distribution of craft beer. His founder Josemaría Mora, popularly known as Chema, discovers the world of beers thanks to the opportunity he had to study in Rochester NY.

In Rochester, he embarks in the journey to get to know the different beer styles and he quickly prioritizes visiting microbreweries rather than landmarks on the places he visits.

Chema takes his first job as an engineer in Watertown, NY, a small town 30 miles south of the Canadian border. In Watertown the bar selection was poor but the beer selection was not. A few bars carried over 50 beers each which helped Chema's palate grow wiser, since he rarely asked for the same beer twice.

On October 2010, Chema returns to beautiful Costa Rica full of excitement but with mixed feelings of leaving great friends and the best beer selection he had experienced. On a trip to the pacific coast in a souvenir shop he finds a keg-orator with Costa Rican craft beer. Confused with the finding, he takes a sample of Segua, and realizes that with craft beer in a tropical paradise that there's no place like home.

In April 2011 Chema visits Costa Rica's Craft Brewing Company for the first time and after meeting the staff he purchases his first case of craft beer in Cartago. Shortly after that, he shares the ales with his friends who don't usually have the opportunities to try these styles. "Teaching my friends to appreciate craft beer is an experience that I want to repeat with all Costa Ricans".

On November 6th, La Bodega de Chema opened doors to the public as a place to learn, meet and buy craft beer.

Now, tell us your beer stories so we can add it to our book.